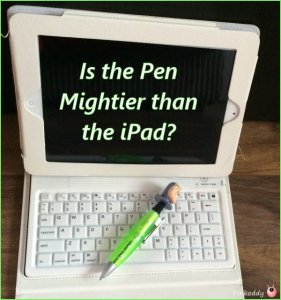 There is no denying that times are changing as we move through the Technology age.  More and more is technology based these days, gone are the days of record players, cassette tapes, video recorders (being replaced with downloadable content), and even cheque books are being phased out (not really needed as much with online banking and ParentPay). I am sure you can think of lots more examples too. But how about the Pen? Can you see it being replaced? Will in the future we only make marks on computers, iPads, and smart phones? Will the pen go into extinction?

The reason I am considering whether the pen is mightier than the iPad is because one of the reasons that it was picked up that our son has Sensory Processing Disorder was the fact that he was falling further and further behind his peers. Last year it was even discussed whether to hold him back a year at school. So far this term he has been doing really well, and even holding his own in some of the groups that he is in with his peers. But now the question falls as to whether his inability to hold a pencil and write properly is further hindering his development – and if, indeed, using an iPad would help him to progress more.

For our Sensory Seeker the obvious answer would be yes to him using iPads if writing is going to become a skill of the past. If the need to write things down by anyone wouldn’t matter. Other ways of developing fine motor skills needed for other things could be developed. Obviously it would give him more of a chance to work through his learning without the added pressure of being able to write. If pens were to become obsolete that would save a lot of trees and a lot less landfill waste from pens that have run out.  Our 11 year old already has a laptop for school and most of the work is done on that, as opposed to pen and paper. It means that he is always ready and never runs out of paper or ink. It also allows teachers to send information and interact with the children easier.

I do not know, I like writing. The actual act. Surely there is more to making marks on the page than the end result. I would love to hear what the many stationery lovers out there have to say on the matter. Do we think it could ever become a possibility? As writing is not about to become defunct any time it still leaves the question as to whether our Sensory Seeker should be using the pen or the iPad. If he is not practising his fine motor skills will this not make them weaker? Making it less likely that he will be able to write in the future? Will this make him lazy? Different? And more addicted to technology? The idea is that they will try this out in groups (at least at first) so he would not be on his own. But then the school are wondering whether he should then utilise it at other times too. I guess it is a tricky one, like all things that need to be considered.

What do you think, are we likely to get rid of pens/pencils any time soon?

And I would love to hear from anybody that has any experience with Special needs children and using iPads at school – has it helped them?  Or even anyone’s thoughts on the matter. Our Sensory Seeker  is equally behind in all areas (apart from technology) so it is not to say that he will not progress with his writing at the same rate, and just be behind his peers.

21 thoughts on “Is the Pen Mightier than the iPad?”