We went to see The Relaxed Performance of The Gruffalo Live at Birmingham Town Hall. Relaxed performances are open to everyone but are specifically for people with an Autistic Spectrum Condition, learning difficulty, sensory processing and communication disorder. I would like to say that a lot of effort has gone into the production and ensuring that everyone was able to enjoy it. This was both before and during the performance. 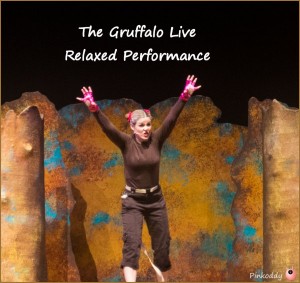 Prior to Attending The Gruffalo Relaxed Performance

Prior to attending there were videos of the town hall, a full guide to the story, visuals and information about the building (getting there and inside), photos of the cast (in and out of their costumes); detailed descriptions of the set, lighting, sounds and list of songs.

There was a visual story guide so that the child would know exactly what would be happening. There was also a visual guide with more detail for children with a higher understanding level. There was absolutely no reason that there would have been anything unexpected about the show. There was also an informal drop-in session on the Monday prior to the show so that the families could see the hall as it would be during the performance; find where they would be sitting, meet the people who would be on duty; meet the cast and ask any questions. 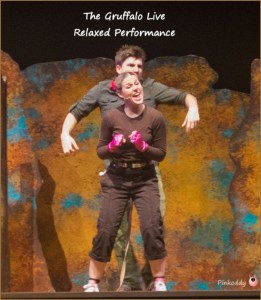 Arriving at The Gruffalo Relaxed Performance

We were told that our tickets would be available a couple of hours prior to the performance. It meant that there was actually no queue when we picked ours up, and gave our Sensory Seeker an opportunity to get to know the venue, purchase a Gruffalo flag (his brother had a book) and go to the toilet.

Near to where we collected the tickets there was also lots of extra information in regards to Autistic Spectrum disorder (who the primary audience was for). I believe this was provided by Autism West Midlands. They had details of how they help and how they are contactable – including family outreach, support/social groups, residential care, supported living, employment support and training. They also had a social network for families living with Autism called Connect (which also has an app for it). Connect allows the user to develop a social network, featuring the people and providers who give them support; gives the opportunity to find local people going through similar experiences; find and promote local activities and events; discover, rate and review local providers and services; access free autism eLearning, download information and resources. This is information has been taken from their flyer.

In fact if my child was newly diagnosed with Autism this would have been a great place to go. They provided plenty of information about the condition, how to help with it, and where to access help. I particularly liked the Guide to Visual Communication Resources leaflet – which also had a list of useful websites. There were also flyers for applying for an Autism attention card – designed for when adults and young people go out on their own and encounter the Emergency services. It will then help the police and other emergency services to make reasonable adjustments to how they respond to the card carrier, and details of anyone who needs to be contacted. There was a whole range of printouts on a variety of topics including sensory issues, siblings, getting active/play etc. The lady also said there was more available from their website.

The Gruffalo Relaxed Performance The Hall

The central area had had the seats taken out, providing a central aisle. This big open space meant that there was plenty of room if anyone need to go in or out of the performance. It also it meant that children had space to move about and dance. It was really lovely as it also meant that the children were able to go right to the front of the stage and see the characters up close. Feeling very brave when the Gruffalo came out – and then down to the floor where the children could touch him!!!! There was extra wheelchair spaces, and some children were up high on another level. The doors were left open and a chill out area was provided (with bean bags and toys). It was less formal and we were told that noise and movement was welcomed. Do what we need to do was the message.  There was low noise from the production and low light levels. The staff all had specialist training and were very good.

Prior to the performance all the cast were introduced and we were told which parts they would be playing (these had as previously been mentioned provided in the parent pack). Charlie Guest was The Narrator and Gruffalo; Will Towler was the Narrator, Fox, Snake and Owl; and Ellie Bell was the mouse. 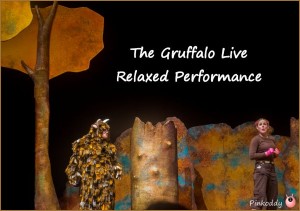 Also we were told about the room that we could do pretty much whatever we needed, that we could get up, make noise, come and go. They did ask if any feedback could be fed to them to help improve future performances and a questionnaire was available at the end (to either fill in there or to post back to them). We were even allowed to take as many photographs as we liked, as long as the flash was off. I think this help many children with special needs as I saw a lot of them happily snapping away.

The Gruffalo Live Relaxed Performance itself was amazing. Just the right duration, with a fantastic mixture of songs, attractive costumes, humour, action and audience participation. We were pleased to see that it was not just a reading of the (much loved) Julia Donaldson & Axel Scheffler book. Theatre Company Tall Stories had adapted it for the stage with its own added bits and extra twists. I think the scenery/lighting was a good balance of not being under or over stimulating and the small cast meant that it was not overwhelming. 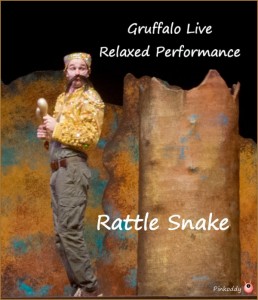 The one thing I did notice is that no consideration had been taken into the differences between children’s needs. For example my son is a sensory seeker – and his needs are quite different to a sensory avoider. There was a lady who was worried about her son who needed to run up and down because the doors were open (and may wonder off or play with them). Her other concern was that he may try to get on stage. I know that all needs cannot be met, as children are so different. Maybe finding out why parents want to come to the performances and exactly how things could be made better will help though. In this case I think an enclosed space for the boy to run would have helped. Our son came in a Gruffalo outfit, which met most of his sensory needs. I liked that there were things for sale before the performance – such as Gruffalo soft toys – which could also have helped with the sensory experience. However, his costume could have upset certain children, and other children wanted to touch him (which is fine with us) but might not have been with other children.

The next Relaxed Performance is “The Tiger who came to tea” – Sunday 11th January 2015 at 3pm.

The Gruffalo’s Child is being performed in London 10th December 2014 – 4th January 2015 (this is not  relaxed performance). 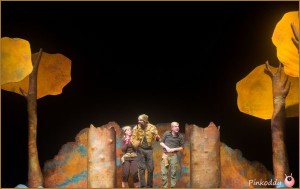 I received four free tickets to see The Gruffalo Live Relaxed Performance. No other financial compensation has been given. All words and opinions are my own (except those stated from the leaflet). Thank you very much we all had an amazing time, and I was really impressed with the effort involved to make comfortable those who may have not been able to cope with the show otherwise.