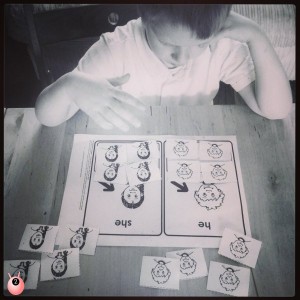 The Sensory Seeker was struggling to understand the difference between the personal pronouns he and she.  He knew that boys and girls are different but calls them both “he.” The Sensory Seeker does not really understand how people could get upset by being called the wrong thing but guess there’s only so many times a girl wants to be called a boy.

Based on the work by Felicity Durham the personal pronouns activity we did was simple, and great for the visual learner. It simply consisted on the child having a piece of paper divided into two. On one side there was a picture of a boy and the word he and a big empty box underneath, and the other side the same but with a girl and the word she. The same images were then repeated on another piece of paper but smaller (so that there were a total of 16 small image, 8 boys and 8 girls).

First we discussed the pictures by me asking which was a boy and which was a girl. I started with this because I knew he would know the answer. This helped him feel more confident which means it is easier to engage and hold his attention. Next I saw whether he recognised the words “he” and “she,” by sight. He didn’t and sounding them out was difficult as they are not phonetically sounding and so he was reading the ee as eh. I helped him understand and waited until I could hear that he knew and could say them both. Next I took my pile of small images and showed him that they were the same as the large ones. I mixed up the pile and got him to guess which card I would turn over, explaining that he needed to give me the answer “he” or “she.” He got really excited when he got it right and said that it was a point! Even when he did not correctly guess he was beginning to really say “she” (as he had previously only said he). I was firm in that I would not allow him to just point or refer to them as boy and girl. As there were only 16 images it was over quickly and so just right for his attention span.