When my Sensory Seeker was younger I wrote about Fussy eating. Since then we discovered that he has Sensory Processing Disorder, so encouraging him to eat food was not going to be as easy as we first thought. The thing to remember is that are lots of different senses at work when it comes to food. Writing down what he would eat made us feel better as the list was actually a lot longer than we first thought. Trouble is depending on how that food is presented can be a key factor in whether your Sensory Seeker (or avoider) will eat. With me I have found it is a lot of trial and error – maybe keep a diary. 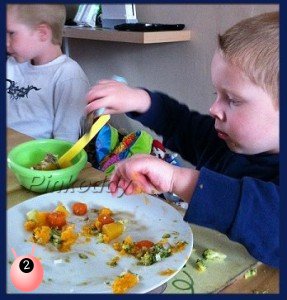 Our Sensory Seeker prefers food to be cold and he does not like foods to be touching. We found that a segregated plate helped, so that he could visually see that the foods were not touching. At a party someone asked if he wanted a cheeseburger but then put it on his plate on top of tomato ketchup. He just would not eat it. Now it’s not even that he does not like ketchup on his cheeseburger, and if he had put the two together that would have been fine. I have long since learnt not to try understand the logic behind how he behaves but just to try and best help him. In this instance I got him another cheeseburger (without ketchup on the bottom). Similarly he will not even try to eat toad-in-the-hole – but loves both sausages and Yorkshire puddings. 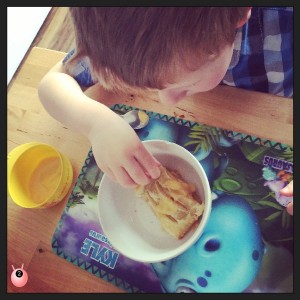 To encourage eating we tend to put at least one food on his plate that we know he does like, and one that is new, or we would like him to try. We often use bribery (pudding/computer games etc) rewards to encourage him. We start slowly – maybe getting him to touch the food for several presentations, then lick it, before eating a small piece. We pick our battles. So although we would love him to use cutlery we have decided that stretching his diet is more important for us at this time. Or if he wants to play with the food, and smear it over himself first, we tend to let him do that too – as we know it can result him in eating more. We do have to be careful that he does not stuff too much food into his mouth though – especially hard foods such as raw carrot. We have managed to get more foods into our Sensory Seeker by him seeing them as a treat – such as pancakes and bananas for breakfast. 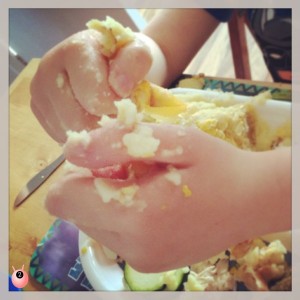 Things to consider about mealtimes  for the child with Sensory Processing Disorder:

If you have any more hints, tips, problems or ideas please add them in the comments below.