Bullying is a problem for too many children, but a child on the Autistic Spectrum may be more at risk than their peers. They are also less likely to be able to make it stop, as they struggle with social communication. They might not even be able to tell those close to them. The National Autistic Society have written a guide on bullying for parents. In this post I talk about bullying and Asperger’s syndrome, as experienced by my son.

Victims of Bullying generally are either:  Passive Targets – those with low self-esteem, shy, academic, on their own, smaller, weaker OR Pro-Active Targets – those with inappropriate behaviour, socially clumsy, perceived as irritating, attention-seeking and not knowing when to stop. Children on the autistic spectrum are more likely to be a target for bullies because they may be seen as different because they cannot always relate to the situation they are in – or communicate what is going on. Children who are on the Autistic Spetrum are often perceived as being low in  social status & friendship (having few friends to defend them). They are naive, gullible,  & eccentric. They are neither cool, macho or popular and are perceived as ‘soft’

I remember my oldest son  upset that he did not want to go to school when he was only 7 years old. Now granted, he was at a new school, where he had to make new friends and the rest of the children had known each other a long time – but we’d moved a lot and he was used to this. He  enjoyed school and has always worked hard, so it came as a bit of a shock. This actually was one of the first big moves towards him being diagnosed as having Asperger’s Syndrome. 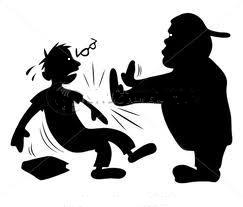 Things can be very black and white.

I remember my son being confused as to why he was in trouble when one of the boys told him it was “a good idea” to bend another boy’s fingers back.

Those on the Autistic Spectrum are unable to distinguish between who are bullies and who are friends. They are unable to differentiate between friendly sparring and physical attacks.

Our son often kept complaining to the teacher that he had been hit so many times that they stopped taking him seriously – they said he complained as if he had been punched when someone so much as accidentally brushed passed him. Fortunately, the school was very supportive. I went in and explained the situation and they put things in place to help him. They made break times (when he was less supervised) more structured by introducing chess club. He also had a dinner lady buddy – that if he had ANY problems (even the seemingly most trivial) he could go and speak to them. They encouraged circle time sessions where children would focus on each other’s strengths.

I hear of so many children who end up being Home educated because of bullying. Do you have a story to share about bullying and ASD? I would especially like to hear any success stories.

Images maybe subject to copyright, used for illustration purposes only.