Sensory Processing Disorder in Italy was always going to be a bit different than at home but The Sensory Seeker coped amazingly well during our stay.Of course there were times when he just didn’t cope, but there are some things I think made it easier for him and other things that I wish I had known before we left for Italy, that would have made things better for all of us. The main thing for us was to just make allowances: Letting him sleep in bed with us some nights whilst we were in Italy for example. Obviously every individual with Sensory Processing Disorder is different but hopefully some of this will help if you are planning on travelling to Italy. 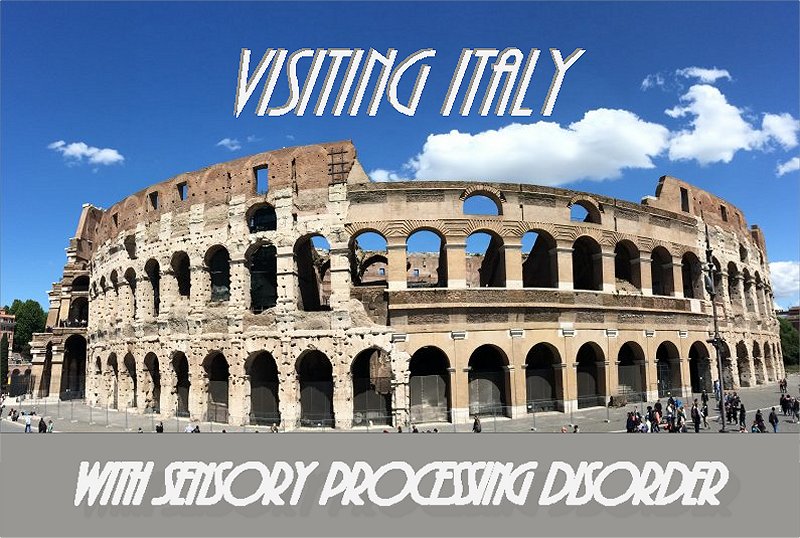 So our flight to Italy was the first time we had taken the boys on a plane. The hardest part was the fact that the electrical devices need to have battery to go through security so the boys were unable to play with their iPods and 3DSs until we then and we weren’t prepared to risk them having them confiscated. In hindsight I wish we had taken the in-car DVD players – these could have been used in the car and again once we were at the resort (as there was no television) and they could have been packed in the hold. You should take into consideration the time of the flight – would it be easier if it was at a time when the child will be likely to sleep (remember this could be delayed and they could be overtired in the airport). Luckily our flight to Italy wasn’t a long one (or shouldn’t have been before all the delays). We did not take advantage of the flight’s special assistance but this means that we could have had priority boarding so that it was not as chaotic and noisy when he went on the plane. Saying that in Gatwick Airport we went through Family Security and this was much less of a wait and felt less intimidating than other security checks I have previously been through.

Things to consider in Italy with Sensory Processing Disorder

I think it is good to discuss things that are not quite the same – such as crossing the road. We discovered that just because you are crossing the road on black and white lines does not mean that the drivers have to stop! Here are some tips from our visit:

Tips for sight-seeing in Italy with Sensory Processing disorder

If you have any questions or experiences about visiting Italy with Sensory Processing Disorder I would love to hear them in the questions below.

Thanks to AttractionTix for the Hop on Hop off Cruise.