Starting school, it always was going to be a big achievement wasn’t it. And to go into a Mainstream school too (although I am still in denial that maybe he’s just not a little bit behind, after all he was in and out of hospital quite a bit at the start).

Matters weren’t helped, in the confusion stakes, by the fact that my 3 other children went back to school last Wednesday, but that my youngest didn’t start until Monday. Fear not we made the most of those days (days to the play farm, picnics in the park, McDonalds, picnics on the beach) and he handled it all very well. 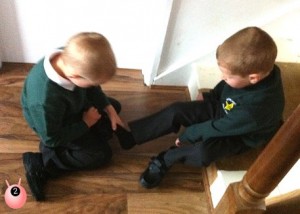 Wednesday came and he was so excited. He didn’t realise he too had a book bag like his brother (who is in the year above) – did you know just how sensational a book bag can be?! And when it was time to get his shoes on he thought that his shoes were his brother (identical but one size apart); he’s never had proper shoes before (just trainers, crocs, and boots). To see my two youngest boys so lovingly together, the older helping the younger one on with his shoes was truly magical. 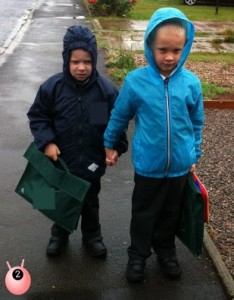 He settled in so well that I felt like a spare part not needed to be there. I could not be sad, I did not cry – how could I when he was just SO happy. He had a good day and was happy to come home with me to have lunch. All the way he was chatting, a lot of it I didn’t even understand what he was trying to communicate, but what I did interpret was the fact that he was very contented. I know he felt “big” and he told me he drunk milk (he keeps asking for milk at home now too). He obviously liked his 1:1 too (he keeps touching her face). 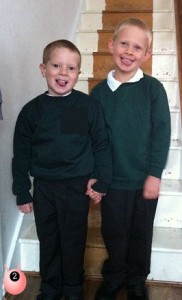 Day 2 and he wanted to put his school clothes on as soon as he got up (meaning skipping breakfast as we do things in a certain order). But once I reminded him he had to have breakfast first he was fine. He did struggle at school after first break, and it affected him all afternoon, but really it was all to be expected. Most importantly he’s still really keen to keep going back again, and has gone in fine today.  I was shown his painting from yesterday and he is holding his pencil a lot better too.

School seems to have really helped him grow up already. I can see a real change in him. Also it’s easier to explain about him doing things (for himself) if you ask him if he’s a big boy? Take this morning for example, he’d have easily let me get him dressed if I had let him. His clothes were already waiting for him, and he’d undressed and put his clean pants on and was carrying them. When I suggested that he get dressed, like a big boy, he did. I was amazed, so proud and that’s when the tears sprung to my eyes. OK the jumper was backwards, and I helped with the socks, but what an absolutely wonderful achievement.