I thought I would do a progress post of how The Sensory Seeker is doing. He is currently 5 years and almost 10 months old.

The Sensory Seeker and Mornings

As long as the routine is there mornings seem to be going pretty well. Yes The Sensory Seeker  may need encouraging to eat his breakfast but generally this is happening (whether that be dry cereal, scrambled egg or he loves bacon). I even have managed to get him to have a drink of milk each day. There have been times when this has been more difficult, and at one point he just screamed and screamed. Looking back I am not sure if I was not fulfilling The Sensory Seeker’s Auditory sense. 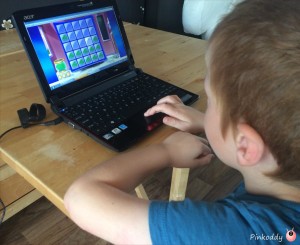 Although it was really difficult at the time I just tried to focus on the fact that it was The Sensory Seeker that wasn’t coping. That it would pass. I knew it was to do with lots of changes and possibly tiredness. Instead of punishing him for his behaviour we tried to make things easier for him (without spoiling). We relaxed our boundaries (such as a complete ban on computer games in the week) in return for behaviours we desired (such as eating all of his breakfast before school). Teeth brushing is going really well, which is a lot to do with our fairy and the fact that he has “big” teeth coming through.  He is also really enjoying playing with LEGO before school – which is great for his fine motor development, imaginative play, sharing and attention. I know at the end of the term he is getting more tired and less co-operative and so I do tend to just save the argument by getting him dressed myself. The Sensory Seeker loves scooting to school – which not only gets us there faster but is good for his gross motor, his proprioception and vestibular senses. I also have my own Microscooter* now to help me keep up with him and ensure that he is safe. Thank you to Microscooters for this kind donation.

The Sensory Seeker At School

School seems to be going really well for The Sensory Seeker. I haven’t heard any concerns and he seems to be progressing at a good rate. He has got really independent at going into school and doing the things he needs to do (hanging up his coat, ticking what he wants for dinner) before slotting into playing alongside his peers. He has had a few toileting accidents (more so when there was a lot of change) but other than that I am really happy with how things are. The Sensory Seeker even seems to be trying now foods as he now has cooked dinners at school. It is good to hear him counting and reading particularly, as when he was hardly talking it was hard to imagine him ever doing these things. He doesn’t like his shirt tucked in or his buttons done up – so we are currently not forcing him to.

The Sensory Seeker After School 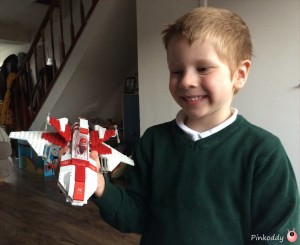 The Sensory Seeker now goes to Boys Brigade, Football club and ICT club (all with his older brother who is 7 years and 4 months): He seems to be coping well (again just toileting issues). He is able to play (mainly with LEGO) without supervision or needing things structured for him. At home The Sensory Seeker can be easily wound up – but think that’s more of a brothers thing. He is occasionally eating with his fork/spoon but mainly with his hands still. Currently we are still concentrating on the fact that he is eating, trying new foods and textures. The amount is small and we do have to barter with him a lot. Bedtimes he goes down pretty much without fuss in routine. Sometimes we relent and let him go to sleep in our bed. He is more and more ending up coming into our bed in the night and the one time he didn’t he had an awful nightmare that I had died. Other than that he’s got much better at not touching people after I have told him and even was easier to have his hair cut this time. The Sensory Seeker seems to have a much larger attention span that he used to and has developed his own interests. We recently took our Microscooters to the Forest of Dean to do the Gruffalo’s Child Trail again and he did really well with reading the words (as well as the scooting).

* I received a free Microscooter to promote the benefits of having an adult scooter on the school run. I was not specifically asked for this post but wanted to share how useful it is in this situation.